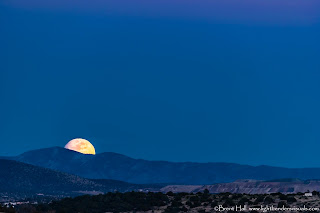 I normally like to plan things in advance whenever possible, especially when it comes to photographing astronomical events; however, this one almost slipped by my radar completely. Thankfully I saw it online that afternoon and had just enough time to do some quick research about the details before heading out.  Armed with some hastily acquired knowledge, I grabbed my gear and jumped in the car.  Luckily I knew where the moon would be rising and that there was a great look-out spot on the southwest side of Silver City-the perfect moonrise-viewing point, and easily accessible, since I only had about 30 minutes before it was due to rise.

Once I got there and got the cameras and tripods all setup, I used my phone to double check where on the horizon the moon would be rising and then got the cameras in the right spot.  For this I used a couple of apps.  Sun Surveyor, and The Photographer's Ephemeris (TPE).  These are both super handy apps for helping you plan your shoot, be it for the moon, sun, milky way, or just landscapes in general.

When shooting the moon, you typically have to use a pretty fast shutter speed to get the moon both exposed right and nice and sharp-since it is a moving object after all.  But this being an eclipse, made it a little different.  Since the eclipse made the moon a little less bright, it made it possible to include some foreground interest via the mountains over which it was rising.  It also became possible to get this in one single expose, without the moon being over-exposed or the landscape being under-exposed.  For the shot above, I was at 400mm at f/5.6, 1/50 sec, ISO 320. That is still a pretty slow shutter, especially at 400mm, but the tripod, mirror lockup, and a delayed timer helped in minimizing camera shake.  Taking the hood off your lens when in these conditions helps a lot too, because if it's even just the slightest bit windy, the hood can act like a sail and start catching wind and causing the lens to move during shooting. 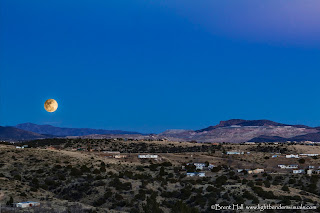 For this shot, I knew I wanted to include the feature on the right, which is called the Kneeling Nun, and is a local legend. So I wanted to show that with the moon. I had to shoot wider for this shot, and also since the moon was already completely up and the eclipse was starting to pass, the moon was now much brighter than before.  So now I had to do multiple exposures, one for the landscape and one for the moon, and blend them together in Photoshop. The foreground image I shot at f/5.0, 1/13 sec, ISO 160, and the moon I shot at f/5.6, 1/500 sec, ISO 100.

I also did a timelapse of the moonrise, and put it in the vlog I did.  So here's the link for that:


For the timelapse I shot it using the same settings as the first image I posted above.
Posted by Brent Hall at 8:19 AM No comments:

Brent Hall
Welcome to my blog! I'm Brent Hall, an adventure photographer/videographer and owner of Light Benders Visuals. I use this blog for three main things: 1. As a follow-along to my adventures. 2. To help you become a better visual artist by posting tutorials, tips & tricks, and all kinds of useful information pertaining to photography and travel. 3. To write about and review anything and everything that is related to photography, videography, and adventuring. If any of these topics sound interesting to you then I invite you to enjoy my writings and subscribe to the blog so you can stay up-to-date with my adventures, tutorials, tips & tricks, and more! If you wish to inquire more about my professional services, you can email me at brent@lightbendersvisuals.com or visit my website www.lightbendersvisuals.com